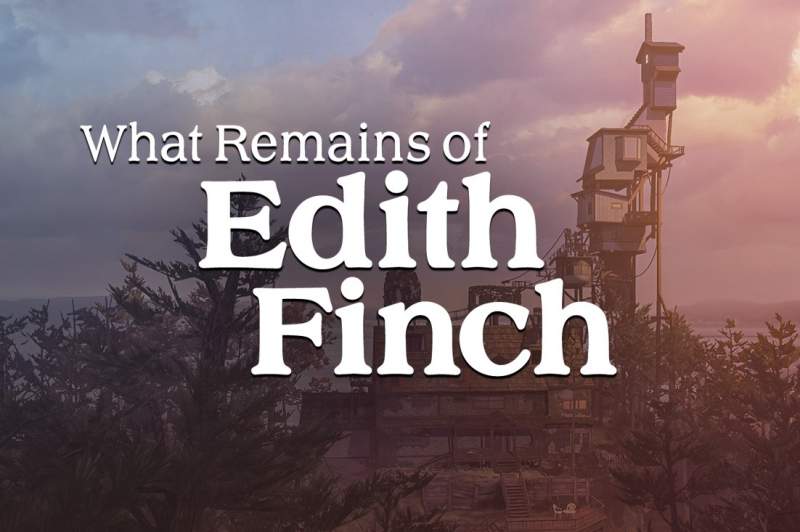 [Review] What Remains of Edith Finch

The game starts out and you’re a young woman who is going back to her childhood home to uncover the secrets of your family’s past. The game is split into several vignettes and each one tells the story of how 1 particular family member died. Some are pretty messed up and most are very sad.

There are 12 individual stories told in this game they’re all different stories with different gameplay mechanics and sometimes different art styles. It was very well done. I’m just going to order these in alphabetical order since I don’t remember the exact order everything is unveiled.

Barabara was a child star and became famous because of her scream. As she got older, she lost her ability to scream. Likely due to cigarettes since there were cigarettes in her room. Her death was very strange because the aesthetic was like a comic book and her story was also weird. She was either murdered by her fan club on Halloween night or just her boyfriend. All I know is, the remains that the police found was her ear. Maybe she lived and ran away, I don’t know.

Calvin was a young boy who was swinging on a swing. He just kept swinging and swinging until he eventually lost control and flew off the swing.

This was all told via a swing mini-game, you end up just flying off into the horizon which is likely not what happened.

Edie was the Grandmother of the Protagonist. Eventually, the mother and Edie Jr (protagonist) left the house where all this death occurred. The mother called a nursing home to pick up the Grandma but by the time the Nursing home showed up. Edie had already left the premises. It’s unknown where she ended up.

This was the most heartbreaking of them all. He was a baby, like 1 year old. Playing in the bathtub and he drowned because the phone rang and the mother left him for a second to answer the phone.

The gameplay was told through the toys where you were controlling toys and eventually things cut to black.

There was what seemed like a wedding, Gus was outside flying his kite. He was happily doing his thing but not really paying attention to how dangerous it was getting. Eventually, a gust of wind picked up a tent and seemingly crushed him to death.

This was all told through a kite minigame, where you’re flying a kite around as the story is unraveling.

Poor Lewis, this was one of the more heartbreaking stories. He got into drugs and had trouble with addiction. Got himself clean and got a job a fish packing factory. Eventually, he went crazy and committed suicide by sticking his head in the fish beheaded machine.

This was one of the more interesting vignettes. It was two things on the screen at once. On one side, you were moving a fish over to the fish be-header, it would chop off the fish’s head and you would move onto the next fish. On the other side was this story purely in Lewis’s imagination. Where he exploring in a boat, becoming a mayor and eventually being named king of a nation. As the vignette progressed, the fantasy took over the screen more and more. I guess to show how Lewis slowly lost his grip on reality.

This was a very strange incident. The protagonist Edie jr, that her brother Milton discovered some secret and then after that, he disappeared.

Molly’s story was very confusing and I’m not sure what happened. She was a young girl and it seems like her imagination got the better of her. In the story, she turns into all of these different animals and has this insatiable hunger. If I had to guess, her cause of death was something she ate but it was never clearly defined.

Odin is the furthest the family tree goes back, he is Norwegian. He decided to move the family home across the ocean an onto an Island. The ship doesn’t make it and he drowns.

Sam was out with his daughter, he was hunting and she was taking pictures. Eventually, he had her shoot a deer which after the deer was shot, the deer twitched and knocked Sam off the ledge.

This one was told through pictures, you’re flipping through the pictures that daughter took. It was very moving.

It’s quickly mentioned that he was killed by a dragon. I guess it was a slide designed to look like a dragon.

This one is just briefly mentioned.

Walter was just a story, no flashy gameplay. He just went into isolation and spent like 30 years of his life living alone in the basement eating canned peaches. Eventually, he decided to leave the house for this first time in 30 years and was run over by a train.

I wanted to talk about this one last because it is there is a big reveal at the end of the game. But before I get to that, halfway through the game it’s revealed that she is 18 years old and pregnant. This is important because, in the end, it’s revealed that all of these stories are stories that Edie has written for her child.

Edie past away during child-birth so this was her chance to tell her child the story of their family.

It’s a shorter game, I finished it in a couple of hours.

Some of the stories are unclear and didn’t make a lot of sense.

I liked it, I heard stories that some period cried at the end of the game. I didn’t have that reaction but the game was definitely moving and one of the better Adventure games I have played.